merch madness and the sound continuum 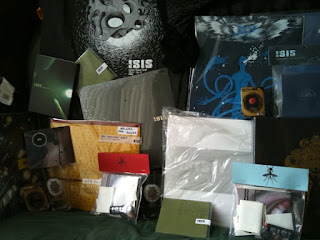 first of all, we'd like to say thank you to all of you who sent us messages in response to our announcement last week about our mutual decision to disband. there is no possible way for us to convey our gratitude for all the heartfelt words as expressed by many of you on this blog and elsewhere, but we will be glad to see any and all that are able to make it out to the final shows. we will do our whatever is within our power to make those shows the best they can be.

speaking of the final shows, we've rounded up every last scrap of isis related material we could find along with a host of newly produced goods in preparation for this last tour, and will be bringing it all with us on the road. these items include but are not limited to: the brand new isis/melvins split 12" (with 2 of the last ever isis songs), the "live V" 2xLP/CD (of the vinyl we'll have both the regular and tom neely versions of the cover) , a final repress of the "wavering radiant" 2xLP (on white vinyl ltd to 250 for all you record nerds out there), out of print versions of the "oceanic", "celestial", "panopticon", and "in the absence of truth" 2xLPs (including colored vinyl), the final copies of the "oceanic remix" and "shades of the swarm" vinyl box sets, the japanese CD re-issues of 4 of our albums (re-mastered and including bonus tracks), new t-shirt designs by a few different people including tom neely and aaron horkey, lighters, belt buckles, glasses, and a whole bunch of CDs and LPs by our various related projects (see more on that below). we've also put together some special packages to give away at random to those that come out as an extra thanks for the show of support. in the words of the immortal melvins: "bring your pennies". for those of you unable to make it to the shows some of these items such as the "live V" 2xLP, the new shirt designs, and the isis/melvins split 12" will be available post-tour via the isis webstore, vacation vinyl in los angeles, etc.
on another semi-related topic, many of you inquired about our various other musical projects and plans post-isis, so below is a list of resources related to that topic for those of you that are interested (click on the names of the various entities to visit their respective sites). there are a couple pages with general info on the activities of aaron harris, mike gallagher and aaron turner including, but not limited to their various musical activities. here also is a partial list of bands and projects in which some of us are current (or at least recent) participants: aaron harris - zozobra / clifford meyer - red sparowes, taiga, windmills by the ocean / jeff caxide - spylacopa, crone (site link and news forthcoming) / mike gallagher - mgr / aaron turner - mamiffer, jodis, greymachine, house of low culture, hydra head records, vacation vinyl, twilight. here also are some additional bands in which we have been members of or collaborators in the past: cable, the gersch, loga, old man gloom, lotus eaters, drawing voices, etc. there will also be new projects by various members of the band in the not too distant future which we will attempt to track through this blog as well as our own various outlets.
thanks once again to you all - we hope to see you soon.
Posted by ISIS at 6:15 PM 279 comments:

ISIS has reached an end. It's hard to try to say it in any delicate way, and it is a truth that is best spoken plainly. This end isn't something that occurred over night and it hasn't been brought about by a single cataclysmic fracture in the band. Simply put, ISIS has done everything we wanted to do, said everything we wanted to say. In the interest of preserving the love we have of this band, for each other, for the music made and for all the people who have continually supported us, it is time to bring it to a close. We've seen too many bands push past the point of a dignified death and we all promised one another early on in the life of the band that we would do our best to ensure ISIS would never fall victim to that syndrome. We've had a much longer run than we ever expected we would and accomplished a great deal more than we ever imagined possible. We never set any specific goals when the band was founded other than to make the music we wanted to hear and to play (and to stay true to that ideal), so everything else that has come along the long and winding path has been an absolute gift. As with any momentous life-changing decision (which this certainly is for the 5 of us), we feel a very dynamic range of emotions about this and cannot express all of it within the space of a few sentences, and perhaps it's best to do what we've always done in and let our music speak for us. It is and has been the truest expression of who we are as a collective and in some ways who we are as individuals for the 13 years in which we've been together. The last and perhaps most important thing we might say in relation to all this is how grateful we are for the people that have supported us over the years. It is a lengthy list that would include those who put out our records, those that played on them and put them to tape, the many bands with whom we shared the stage, all of our family, friends and companions who supported us in our individual lives and thus made it possible for us to continue on in the band, and most importantly those who truly listened to our music whether in recorded form or by coming to out to our shows (or both). It is quite true that we would never have done what we have without those people, that is many of you who are reading this. Our words can never fully express what we feel, but we hope that our music and the efforts made to bring it into being can serve as a more proper expression of gratitude for this life and for everyone in it. Thank you.

In more immediate and practical terms the tour we are about to embark upon is indeed our last. We are hoping that these final live rituals can help us bring a close to the life of this band in a celebratory and reverent way, and also provide us with a chance to say goodbye to many of those that have supported us over the years. While there is a measure of sadness that comes with the passing of this band, we hope that the final days can be joyous ones during which any and all that wish to come and join us will do so. It seems fitting that the last show of the tour and of our active existence will take place in Montreal, the site of the very first ISIS show in 1997 (though that was an unintentional move when booking the show initially). After the tour we also plan to follow through with other projects set in motion some time ago - pursuing the completion of a final EP, compiling live audio and visual material for future releases, and generally doing whatever we can to make our music available for as long as there are people who wish to hear it.

Thanks again to any and all,

We've added an Olympia, WA show to our upcoming west coast tour. The show will be May 30th at the Capitol Theater and will also have Jakob and Tombs opening. The rest of the tour dates are below -

See you in a hot minute -

To celebrate the 1 year anniversary of the release of Wavering Radiant, we've decided to reveal the lyrics to the entire album. It's hard to believe it's been a year already! Thanks for all the support and Happy Cinco De Mayo!

More news soon...
ISIS
01. "hall of the dead"
the great stone walls rise above our heads, cold and sad pale light, a dusty veil
the sun makes its way in destitute, weak you're at my side again faithful guide unfailing, here we stand among the others the living among the
dead
veins still flowing full lungs filled with white light
push forward lifeless bodies swept aside they are on us cast a net of armor over our heads hide our life lest it be lifted from us
we must leave this place of deathly decay
don't look back, press on
02. "ghost key"
it's cold snowing blue light dusk settles
a fire burns with failing light against the growing darkness
bending over the dying flames you were with me then as always
through the fluttering veil of frozen blue a hooded figure cuts its path
to cleave the night in two
pull its outer husk from its body and the rest escapes
and there upon the ground the remnants of our struggle
this is the ghost key
03. "hand of the host"
it is here that vice indulged bleeds the living of their trust
hand of the host extended from his fingers dangles scented flesh
bodies offered spun from infant minds perfect in their empty conception
to be devoured by my lustful heart i am commanded "do as thou wilt"
through the halls i am lead following i am lead
'writhe and gnaw each other's flesh'
he lies uncovered this ancient man of bristle and bone hoary and unwashed his lonely soul
fills the room
our reverie lays broken on the floor cast him out into the throngs into unholy laughter
04. "wavering radiant"
05. "stone to wake a serpent"
we four, bound by blood standing in the crossroads
on the underside of the world waiting our turn
here we see coiled serpent black and baking in the sun
stone is flung serpent wakens arrow of poison pierces our hearts
teeth sink into tender flesh lightning strikes, too fast to see
we seek succor for the stricken pleas met with spiteful laughs
slow advance, not to stir the poison its course fast and merciless
merciless, merciless
in vast halls, buried in hurried hordes no help found here, only dreadful tears
06. "20 minutes/40 years"
tendrils extend from the cloudy black mass
they slither and slide through the ones and zeroes prophecy of collapse unfolds last grain of sand spirals down the hole
chance has graced me with a gift grasp at gold before the dark descends sun beats down and panic reigns in this time of endings
eyes are shut, feet are bare for this journey i'm unprepared
i walk on sight renewed seek new life i seek new life walk on
seeking her, the one i wish to see she wanders the outer lands from the grasp of wolves i will pluck her
twin arteries flow with the pulse of one mighty heart
07. "threshold of transformation"
i've arrived city of lucid dreams
before me a building looms caked in inky grime
the act unknown actor in sleep here i enter, and here i see the circle and bones made in haste
winds to anoint the faithful
amorphous specter turns from old to new rests in faith beside me we wait for the quiet fire to be born and there it is embodied by a boy
his voice small and grey whispers smoke to the chosen
upon our heads he places crowns sewn with hiss and higher tones
the boy presses whispers into her and they bathe in valley's pale rain
Posted by ISIS at 5:45 PM 645 comments: