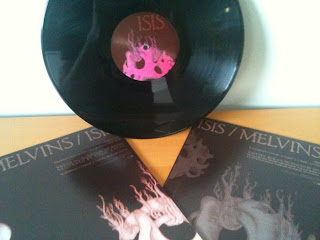 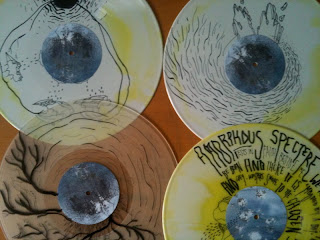 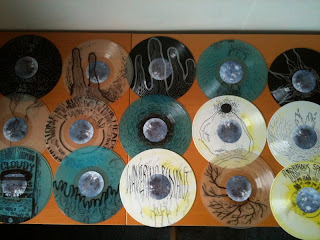 the isis/melvins split 12" will be released officially on the 13th of this month and available one week early (starting july 6) exclusively from vacation vinyl in los angeles. vacation will have a version of the 12" signed by all members of isis and the melvins as well as a limited number of LPs with hand drawn artwork by the folks responsible for the "wavering radiant" album art (aaron tuner and faith coloccia). the LPs with hand drawn artwork are leftovers from the original pressing of the "wavering radiant" 2xLP - there was an overrun of the side A/B record with no side C/D record to go with it, so instead of letting those go to waste they're now serving as backgrounds for some drawings and text based on themes from the album. both are available to in-store customers at vacation vinyl and are likely to run out quickly. the regular version of the 12" should be available at finer retail stores in the US and europe as well as select webstores, distros, etc. the split is a release from hydra head records, features 2 new/unreleased songs from isis ("way through woven branches" and "the pliable foe"), 2 alternate/remixed versions of songs from the new melvins "the bride screamed murder" album ("pig house" and "i'll finish you off"), and collaborative artwork/design by mackie osborne and a. turner.
in other isis related news aaron harris has contributed drums to 3 tracks on the new album by rajas. you can check out some of aaron's contributions on the track "rupee" currently up on the rajas website. jeff caxide has a new project called crone which has recently begun work on tracks for a future release. mamiffer will be playing on july 9th in seattle with altar of plagues, valinas, etc and are continuing work on the next album (to be completed later this summer). the second record by clifford meyer's taiga will be out sep 22 on conspiracy records. more news on isis related bands/projects as it becomes available.
lastly, thanks to all who came out to the final isis shows especially our family and friends, thanks to cave in, the melvins, tombs, jakob and totimoshi for playing with us, and everyone who took the time to share something with us about what isis has meant to them. to be able to complete the ending rituals with such substantial support from all those around us means a great deal to us - thanks again everyone...
Posted by ISIS at 4:42 PM 436 comments: